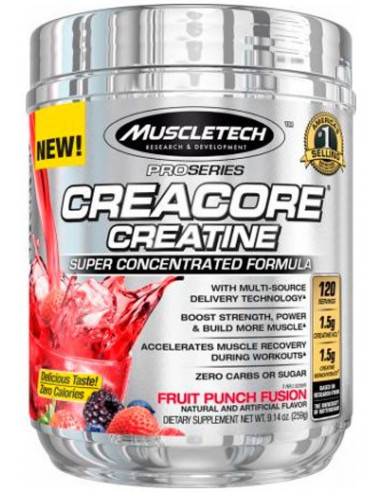 What is MUSCLETECH CREACORE 293 G.?

The MUSCLETECH CREACORE formula requires no loading or unloading cycle, nor does it cause retention. In each serving, twice as much creatine HCL per scoop has been incorporated than any other creatine HCL on the market. Not only does it deliver more creatine HCL, it also delivers scientific support.

MUSCLETECH CREACOREDelivers nearly twice as many servings as the closest creatine HCL competitors (80 vs. 48 servings).

MUSCLETECH CREACORE is the first formula with a precise ratio of creatine to fenugreek extract (3500mg:900mg) per 2 scoops. In a clinical study article published in 2011, subjects supplemented with this combination increased their bench press and leg press max reps and gained muscle mass. All without having to add carbohydrates

Researchers believe that ingesting fenugreek with creatine may be an effective way to increase creatine uptake directly into the muscles similar to dextrose, without having to ingest a large amount of carbohydrates

Directions for use of MUSCLETECH CREACORE